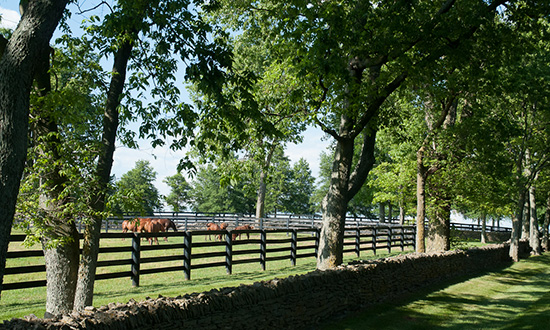 Even though Virginia Moore’s farm is hemmed in by a shopping center, apartment complex and two highways, she says she’ll never surrender to the urban sprawl at her doorstep.

As long as she’s around Mrs Moore vows, the Louisville suburbs will have a touch of country – complete with grazing thoroughbreds.

The 85-year-old owner of Golden Maxim Farm needs only to look out the window from her rocking chair to see how development has consumed the once-bucolic area around her 120-acre estate. Now developers want to nibble away at her property, a prospect that leaves Mrs. Moore aghast.

Her far, about eight miles east of downtown Louisville, already is bounded on two sides by a shopping center and an apartment complex, and on the other two sides by superhighways. She has to shut the windows to keep out traffic noice.

“I guess they think I’m a stubborn old woman,” Mrs. Moore said of the developers. “The just keep trying and I just keep saying no.”

Horses graze on green pastures divided by whitewashed fences. Nearby, an elderly caretaker heaves an armful of garden tools onto his shoulder and carries them across the yard past a stone farmhouse.

Dozens of commercial developers have approached her with offers to buy parcels of land. Some have wanted to erect office buildings or condominiums, and others discount stores. Another would like to build an amusement park.

One Louisville real estate agent, who asked not to be identified, said he wouldn’t be surprised if the land was worth as much as $25,000 an acre, or $3 million for the 120 acres.

He said the property could be worth much more – as much as $80,000 an acre – if it were split into parcels and developed as a subdivision.

Gayle Bailey, an agent with Paul Semonin Co., gave a lower estimate. He said that because the market currently is soft, the property probably would bring just $10,000 an acre.

Mrs. Moore has managed the farm’s finances by herself for the past three years since her husband, Clayton, 89, moved into a nursing home.

Urban development has gobbled up about 80 acres of the 200-acre estate she inherited from her mother in 1929. In most cases, the Moores virtually were powerless to stop it.

“We knew we had to sell it or it would be condemned,” said Mrs. Moore. “and we didn’t want it condemned.”

Bowman Field, a nearby commuter airport, was expanded repeatedly. Then came shops, fast-food restaurants and an eight-theater movie complex.

Even though Virginia Moore’s farm is hemmed in by a shopping center, apartment complex and two highways, she says she’ll…read more

Arabs Arrow and Tiger Will Carry Top Imposts of 119 Pounds

The Clark, which saw a field of six older horses compete at a mile and a sixteenth, resulted in a…read more